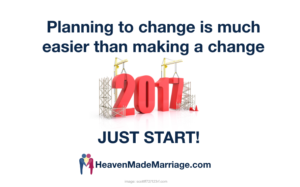 I mentioned back in August my intention to launch a totally new website. I thought then I would have it done by October.

Then came November. Nope.  And the end of December is now at hand. Not yet.

What I’ve discovered is that it’s much easier to plan a change than to actually make one.

Do you make New Year’s resolutions? I don’t any more. One reason is that it is always easier for me to come up with great ideas for how I want things to be different next year than it is to actually follow through on those ideas.

When it comes to making changes in your marriage, do you find the same thing is true? It’s much easier to think of what you want to be different than to actually do it.

I wonder why that is.

Comfort Zones Are So Comfortable

In his book A Million Miles and a Thousand Years Donald Miller says, “Humans are designed to seek comfort and order, and so if they have comfort and order, they tend to plant themselves, even if their comfort isn’t all that comfortable. And even if they secretly want for something better.”

It’s so true. We like the familiar, even if we don’t really like the thing we are familiar with.

I hate my current website. It’s ugly and cluttered and hard to navigate. It’s out of date compared with most of my marriage blogging peers, many of whom have remodeled multiple times since I’ve been blogging.  The thing is I know how everything works here, even if I don’t necessarily like the way it works. I’m comfortable with it.

In the same way, many secretly dream of a better marriage, but they don’t always want to step into the discomfort of daring to do what it takes to get one.

I’m experiencing a lot of fear in moving to my new platform. I’ve got seven years worth of experience here, and everything pretty much works. I’ve been double posting here and there for a month or so, testing things out, getting the feel of the new systems. But I know that when I launch the new site stuff isn’t going to work smoothly. Site launches are just like that.

I’m also afraid of losing people in the transition. I’ll have a new web address, new RSS feed links, and be renaming and relocating my Facebook page to match the new site. I know I’m going to lose some subscribers and followers in the process. I don’t like that.

Change in marriage is scary too. We worry over what we might lose in the process even when there is so much to gain.

It’s a Lot of Work

Sometimes we are naively optimistic about how hard change can be. Moving to a new website has been a lot more work than I thought it would be. I’ve got over 500 posts to move to the new website. It’s a daunting task. There is a significant learning curve with the new site – much more than I expected.

After starting on the new site, I’ve put it aside several times, just feeling overwhelmed with the task.

We can do the same with changing our marriage. We start into it, and when we hit that first significant bit of resistance or struggle, we quit. It’s too hard. It’s too much work. And we revert to the old way of doing marriage.

But in January I’m going to launch anyway. I’m just going to start. It doesn’t have to be perfect or how I want it to be in the end. It just has to be good enough to start.

And one day you’ll realize that you’ve made it. Then you’ll find the next thing to work on.

Here’s another thing about my new website that is also true of marriage changes. You just have to keep going.

I know I’m not finished on the launch date. I’m only starting. There will be much more work ahead. I don’t need to do it all at once, but I can slowly build on what I’ve done so far and keep making improvements. I’ll keep my eyes open for what’s working and what isn’t. I’ll be open to feedback and constructive criticism.

And I’ll just keep going. I encourage you to do the same.

What kind of changes have you been hoping and planning for in your marriage but have been putting off because you are comfortable, because you’re afraid of change or the amount of work it will take? Where will you start in 2017? What little changes can you begin with starting next week? Let’s do this thing!