When it comes to growing your marriage, someone has to go first. 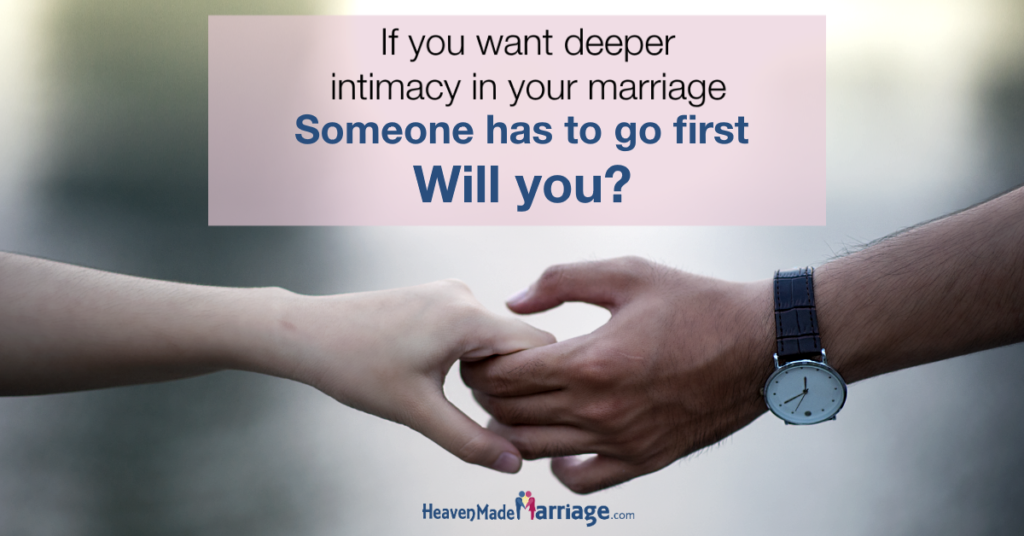 When a couple wants to move off The Path of Separation and onto The Path of Intimacy, someone needs to be the first to reach across the divide. Someone has to initiate bridging the gap that has grown over time between the two of you. Someone has to go first.

As we have been exploring over the past few weeks, the Bible makes it clear that we should each view our marriage through the lens of the Bridal Paradigm, the notion that the relationship between Christ and the church provides us a perfect model for marriage.

Jesus is the divine initiator and pursuer who poured out his very life in order to win us as his bride. He didn’t wait for us to get our act together or to pledge our love to him. He proactively reached across the divide caused by our sin and human weakness and made a way for us to be in intimate relationship with him.

Accordingly, when it comes to growing your marriage, restoring intimacy and reaching across the divide, I conclude that the husband should be the one to go first, just as Jesus did for us.

My wife and I have always had a good marriage, yet my revelation of the Bridal Paradigm led to a gradual transformation in my relationship with Jenni. It ultimately brought our marriage to new levels of intimacy and passion as we learned to live in the oneness that God had in his heart for us.

After a season of intense study of what the Bible has to say about marriage, I began to realize that God intends me to “go first.” I began to pursue my wife in the same relentless way Jesus pursues me. I began to try to love her with the same kind of intense and unstoppable love He lavishes on me. Jenni, for her part, began to see our marriage through the truth of the Bridal Paradigm as well, leaning into my love and leadership as she did with Jesus. She began to open herself up more fully to me than she ever had before.

What is a wife to do if her husband doesn’t take the lead to go first in pursuing a deeper, more intimate connection? Should she just wait for him to come around?

In our marriage, there are plenty of times when I fail to “go first” in restoring our connection after some kind of disconnect. Jenni doesn’t just wait for me to come around and set things right, even thought I’m supposed to be the one to initiate the reconnection and put us back on the Path of Intimacy. I am thankful that she is willing to be the one to reach out first, to cross whatever divide has arisen. In the end, our relationship benefits.

When a wife is the one who gets a revelation of what God wants for their marriage, she can and should go first.

I read this quote in a recent post by my fellow marriage blogger Robyn Gibson of Up With Marriage.

So I wrote to Robyn and asked her to describe her own experience of “going first” in her marriage. Here is what she shared with me.

“Going first” in marriage was such a great opportunity and honor… of course, at the time, I didn’t realize it.

It wasn’t about who was smarter, more cultured or had better character. I was the one that wanted the marriage to change – I was the most vocal about those changes – I had the most complaints about our present course. It was simply that the Holy Spirit made it clear to me first what I was to do.

I could discern plenty of flaws in Darrel, but I wasn’t to point them out for correction or tell Darrell how to be a better husband. God’s purpose for me seeing the flaws was so that I would move first in giving grace while HE repaired Darrell’s heart.

Scott said, when we get our, “heart attitudes right, the “roles” will pretty much take care of themselves…” When I left Darrell in the hands of the Spirit and focused on my own heart attitude – I became better in my role as a wife. The Spirit knows what kind of wife Darrell needs and so He knows how to change me. The reverse is also true.

It Starts With You

Ideally, I see it as part of the husband’s Christlike leadership responsibility to win the “competition of self-sacrificing,” as Robyn so aptly put it. But in either case, both spouses should obey the Holy Spirit’s promptings and do what is best for the marriage relationship.  Regardless of what your spouse does or doesn’t do, work on growing into the best spouse you know how to be.

In almost every case I’m aware of where God performed a transformation in a marriage, one person had to start the process. Are you willing to be the one? Don’t wait for your spouse to make the first move. If you want a better marriage, reach across the divide toward him or her starting today.