Jesus is the only valid definition of a husband’s authority in marriage. 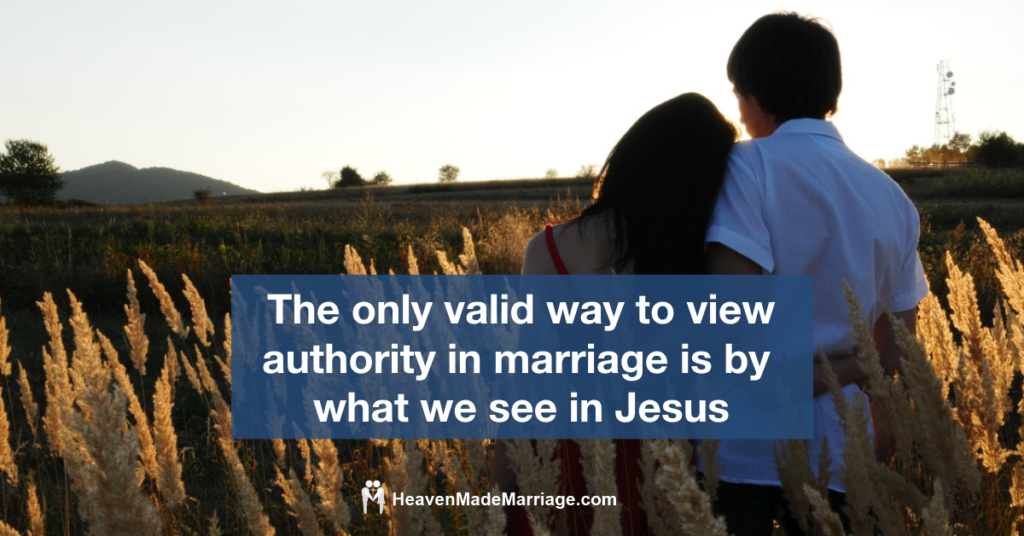 In my last two posts, I explained that what the Bible mostly teaches us about marriage deals with the heart attitudes husbands and wives should take toward one another. Though many see these scriptures mostly as an explanation of hierarchy and roles, I just do not see them that way.

Today I am going to focus on the issue of authority in marriage because it is an important dimension of the Bible’s instructions on marriage. However, I want you to keep in the front of your mind all that I’ve said about the attitudes of the heart in my last two posts. (See Why I’m a Megamysterian and The Problem With Roles in Marriage.) To consider authority in marriage without the lens of the Bridal Paradigm is dangerous and misleading.

The Implied Authority of Headship

It isn’t politically correct in present-day America to state that husbands have authority over their wives in marriage. As I have mentioned before, this is largely in response to the frequent misuse of authority by so many overbearing husbands.  As a result, our culture would have you believe that any gender-based differentiation in marriage is unfair and outdated. It’s popular to make equality the measure of a good marriage; popular but wrong for many reasons. But that’s another post.

The New Testament teachings on authority in marriage describe the husband as the “head” of his wife. The Greek word there is “kephale.” I’ve read extensively on the meaning of this word, and I have carefully studied the linguistic gymnastics some have used to justify their view that “kephale” does not imply authority. But if I use the Christ/church metaphor as my main lens, which I always do, I can only conclude that there is an implied authority given to husbands in the marriage relationship.

However, in trying to decipher what this authority means for me as a husband, the only viable definition that works for me is Jesus, as the Apostle Paul makes clear.

For the husband is head of the wife, as also Christ is head of the church; and He is the Savior of the body. Therefore, just as the church is subject to Christ, so let the wives be to their own husbands in everything. Husbands, love your wives, just as Christ also loved the church and gave Himself for her,
Ephesians 5:23-25

I cannot see any reference here to who makes decisions or who has control over whom. What I see here is a call for a husband to be like Jesus to his wife. Of course, Jesus’ kind of headship comes with implied authority, but you must not consider the implications without using Jesus as the reference point.

How Jesus Uses His Authority

There are a lot of wrong metaphors used for marriage: pilot and co-pilot, captain and first mate, president and vice president, and others. Elements of truth may be gleaned from each of these, but they all are ultimately lacking. Christ and the church is the clearly stated biblical metaphor for marriage.

Based on my understanding of who Jesus is and how he relates to me, my authority as a husband should only be expressed in Christ-like ways.

There are, of course, many other ways Jesus has authority in my life, but as you can see from these few examples, very few wives would complain about such expressions of authority from their husbands.

A Plea to Husbands

I very much hope you’ll read For Husbands Only – Lead with Love, Part 5 of my series What I Believe About Marriage. I’ll conclude this post the same way I concluded that one.

I hate the way some people portray the biblical notion of headship as a thoughtless, disheveled man issuing edicts and orders from his Lazy Boy recliner. But you know what? There’s probably a reason, a really bad reason, for that negative stereotype.

My heart’s desire is to see millions of good, loving, strong husbands walking out their authority like Jesus, in such an exemplary and powerful fashion as to wreck these negative stereotypes forever.