Every emotional interaction with your spouse goes one of three ways. Only one way is helpful. 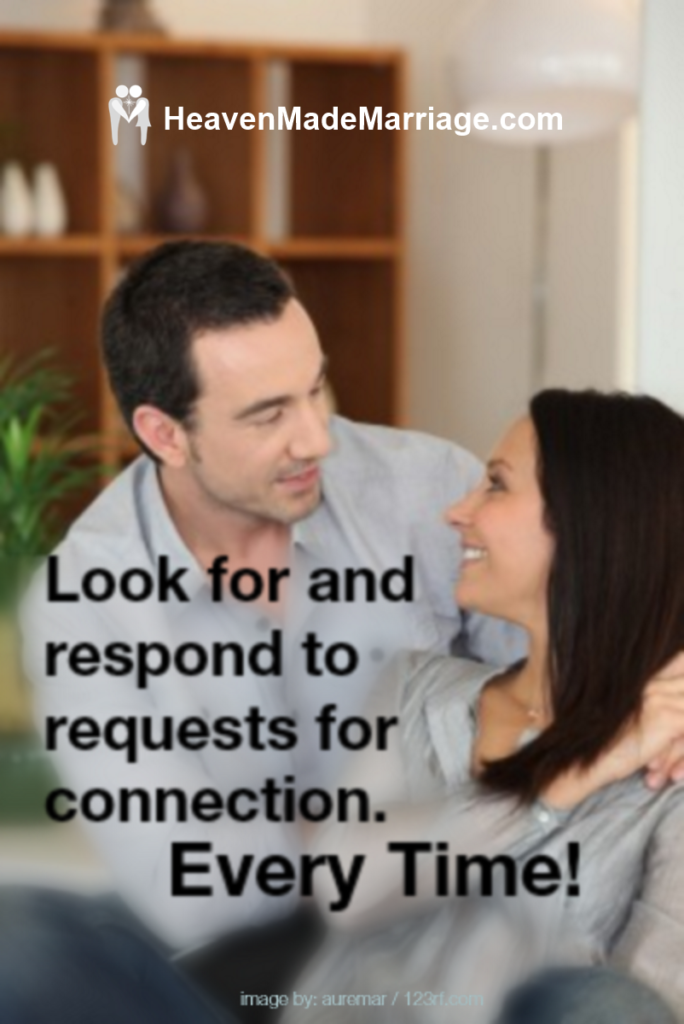 Dr. John Gottman, a relationship researcher, performed a study on newlywed couples a few years back. His team observed how the couple interacted with each other during what he calls “emotional bids.” Dr. Gottman describes bids this way:

A bid is any attempt from one partner to another for attention, affirmation, affection, or any other positive connection. Bids show up in simple ways, a smile or wink, and more complex ways, like a request for advice or help. In general, women make more bids than men, but in the healthiest relationships, both partners are comfortable making all kinds of bids.

There are actually three choices you have when our spouse makes an emotional bid:

The choice to respond to your spouse’s emotional bid by turning toward him or her will often require a little bit (or a lot) of selflessness.

For example, say your wife exclaims how her feet hurt as she takes off her shoes. You could ignore her statement and continue scrolling through Facebook on your phone (turn away). You could tell her that her feet smell (turn against). Or you could move in and begin to rub her sore feet (turn toward).

As another example, say your husband comes through the door complaining about his tough day. You could pretend you didn’t hear him or simply say, “Oh,” and walk away (turn away). You could tell him you wish he would just leave that garbage at the office (turn against). Or you could give him a kiss, pour a couple glasses of wine, and ask him to join you on the couch while he tells you all about it.

In most cases, turning toward your partner is not the easiest choice. It might require a little of your time and a bit of emotional or physical effort. But the long-term benefit of building connection and trust is well worth the short-term sacrifice.

The trickiest part of emotional bids, however, is not in the choice of how to respond. No, the hardest part is actually in realizing when they happen. Some bids will be obvious but many may be really subtle.

Some examples of obvious bids:

Some examples of more subtle bids:

Whether obvious or subtle, your response is critical for building trust and intimacy in your relationship.

You might say to yourself, “If he/she really needs something from me, why doesn’t he/she just ask me?” It’s quite possible that your spouse isn’t even aware that he or she needs something. Second, when you respond to an unspoken desire for connection, you tell your spouse that you are tuned into them and eager to make a meaningful connection.

Gottman’s research seems to indicate that this choice is a big deal.

Make it a goal this week to be especially aware of emotional bids your spouse offers you, and make a commitment to respond by purposefully turning toward.


Share in a comment below about a time when your spouse responded to your own bid, and how it made you feel. We’d love to hear your story.

Further reading from the Gottman Institute: