Why did a poorly written book followed up by a mediocre movie grab the hearts and minds of millions of women? 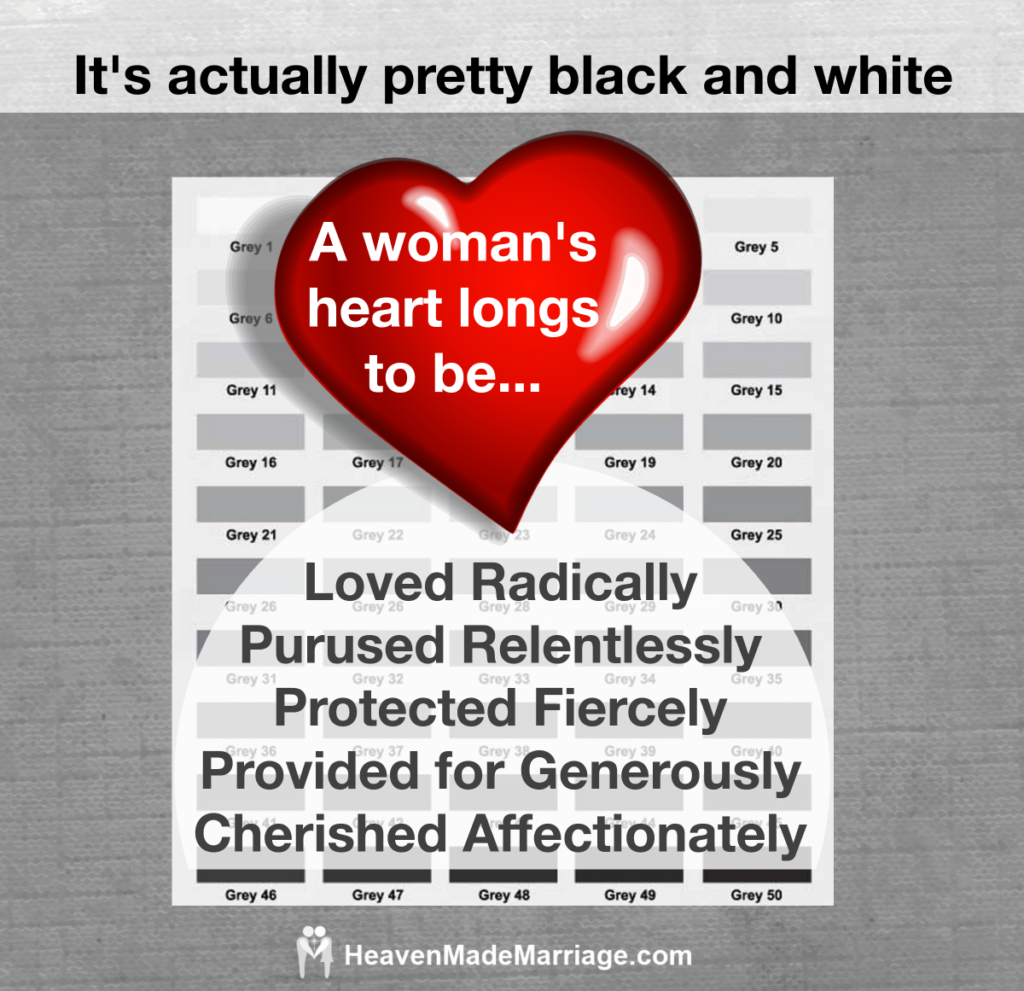 I’ve purposefully chosen to stay out of the Fifty Shades of Grey (FSOG) fray up to now. So many people have covered the topic that I figured I wouldn’t be able to add anything significant to the conversation.

But it’s hard for me to ignore the fact that over the last few months, my blog stats show that my post A Wife’s Sexual Surrender has been consistently at the top of my most viewed pages. The 2011 post shot up in popularity with the release of the FSOG book and then again with the recently released movie. No doubt many disappointed Googlers landed on that post, written long before the release of the book, to find nothing remotely close to the kind of “submission” depicted in FSOG.

I have often wondered what all these poeple, the majority of whom are presumably women, are looking for in a post on sexual surrender?

It’s this question that ultimately led me to finally wade into the murky FSOG waters today. And this question leads to some similar ones that have been nagging me ever since the FSOG phenomenon took our popular culture by storm.

How is that a such a poorly written erotic romance novel spent months atop the best seller list and sold more than 100 million copies in 52 languages worldwide?  One book blogger  said about the book, “In all honesty, though, this book is awful.  Really, truly, mind-bogglingly awful.” The New York Review of Books, after acknowledging the popular success of the book, summarized the critics perspective this way,  “Critics, by contrast, have found much to abhor about the work.” Yet the readers at Amazon and Barnes and Noble both give the trilogy an average of four-and-a-half out of five stars. How could the progenitor of such mediocre tripe be named to Time Magazine’s list of the “100 Most Influential People in the World?”

Further, the movie based on the book has been critically panned, receiving one star on Rotten Tomatoes and a little south of two stars on IMDB’s critics review. Yet the movie has set box office records, grossing in excess of 500 million dollars in the month since its release. But why? As with the book, critical and popular opinions stand in stark contrast to each other.

These are questions I’ve seen a few writers attempt to answer, but most of these answers haven’t fully satisfied my curiosity.

What The World Says

Admittedly, I have neither read the books nor seen movie, but I’ve read enough about them, from enough varied sources, to get a pretty clear picture of the content. In researching for this post, I’ve also read a number of theories on the reasons for the FSOG phenomenon, from both secular and Christian sources.

Secular sources are decidedly mixed as to the effects of FSOG on society. Many call it harmless mind-candy for bored housewives. Some laud the permission FSOG supposedly gives women to free themselves sexually or to tap into their hidden fantasies. Others argue strongly that the books and movie promote sexual violence against women.

As for the reasons for its popularity, secular writers say the attraction is in the way the story portrays the healing power of love, even though it does so in a totally unrealistic fashion. Other say it appeals to women’s innate desire to be a “rescuer and healer.” Many mention women’s common attraction to “bad boys.” Surprisingly few point to the kinky sex as the draw.

As true as all the badness is with FSOG, we have to admit that millions of professing Christians have read the books and seen the movie. From what I can tell by the many comments I have read, most women loved it and recommended it to their friends. Of course that doesn’t make it right, but it does further beg the question of why women, Christians and non-Christians alike, seem so compelled by the story line?

We also have to admit that a non-trivial number of women, Christians among them, claim to have a renewed sense of sexuality and many report improvements in their libido and sex lives as a result, short-lived though it may be.

Stopping at condemnation of the books and movie as perverted, evil and destructive will do little to further our understanding of the popularity of FSOG. Likewise, simply warning, scolding or even condemning those who have chosen to partake of FSOG isn’t going to help us or them them understand what it is they are really after.

It’s understanding I want to gain as well.

I’ve realized that I keep researching and rewriting the first part of this post because I have tremendous trepidation over actually putting my theory out there.

As I freely admit in my bio, I’m not a psychologist or trained theologian, so take what I’m about to say as just another marriage blogger’s opinion, worth what you paid for it.

Enough caveats. Out with it.

I believe so many woman are drawn to the Fifty Shades of Grey story because they long to be radically loved and cared for by a strong man. Women paint themselves onto the seemingly blank canvas that is Anastasia Steele, the story’s female protagonist, because the idea of surrendering themselves to someone whose heart they totally own and who will completely care for them (emotionally, sexually, spiritually, financially) is a huge turn-on for many women.

So strong is this desire that women are willing to look past their disdain for Christian Grey’s overly controlling and sadistic nature. Though there are exceptions, many women report that the S&M sex is not what drew them to the story and that they have little desire to engage in the practices depicted so graphically in the books and movie.

The Longings of the Heart

It is difficult to paint the complexities of human longing with simple, broad strokes. Yet, due to the sheer mass appeal of FSOG, it’s obvious that the story has clearly tapped into many women’s basic desires.

My feminist friends are no doubt rolling their collective eyes at my theory. I hear the chant, “Down with the patriarchy and misogynistic notions that women long to be taken care of. What women really want is independence, power and equality!”

Really? I find nothing of what feminists claim that women want within the FSOG story. Nothing. Yet women are drawn to it by the millions.

Now, before you accuse me of being a woman-hating misogynist, you should read more of what I’ve written on the subject. My “What I Believe About Marriage” would be a good place to start.

Let me state clearly that I believe that a woman can be both strong  and submissive, that the two are not mutually exclusive. And yes, I did just use the S-word. I agree that feminism has helped to right some historical wrongs, and I absolutely believe men and women are of equal worth.

But I also believe that God set up the ordered partnership that is marriage as described in the Bible. I believe that being equal in value does not mean men and women are the same or interchangeable. I believe God filled our hearts with innate desires that correspond to our God-given roles, though the world will try to get us to deny and denigrate our very natures.

I believe that what most wives really want is a husband who will love them radically, selflessly and unconditionally, and who will pursue and woo them relentlessly, as Christ does with the church. I believe they long to find the bliss that comes through willingly surrendering themselves to such a love, only to find themselves the object their husband’s deep affection, relentless protection, and generous provision (as we receive from Christ in our love-relationship with him).

And in such a marriage you are going to find some really great sex.


What do you think of my theory? What have I missed? Why do you think FSOG is such a draw for women? Chime in. Leave a comment.

3 thoughts on “Rethinking 50 Shades of Grey”