What if the goal in every conflict was to maintain connection instead of to prove that you are right? 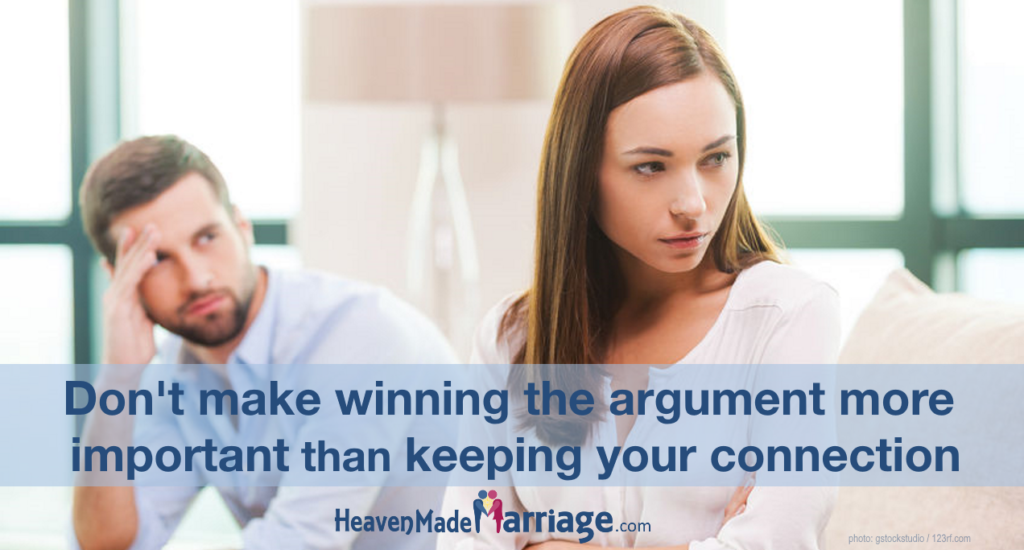 Every couple has disagreements and conflicts. It’s inevitable. In most cases, our goal is to prove we are in the right. Today, I’m proposing a different, more radical goal: to maintain your connection.

Proving you are right has its merits. It demonstrates your knowledge of the subject matter. It shows your ability to think on your feet and to argue your point. It allows your partner to see the obvious brilliance of the right (your) answer and change their mind.

Of course being right or wrong in a disagreement matters, it’s just that it should matter less than protecting your relationship, and in particular, guarding intimacy in ways that maintain your connection.

As you will see below, there are things we all do during conflict or disagreement that break our connection.

The Wrong Way to Be Right

Shutting down conversation – When we feel strongly about something, it’s easy to speak in a way that does not allow room for our partner to speak. When we shut our spouse out of the conversation, it’s no longer dialogue, it’s making a speech. If your spouse senses that you aren’t willing to hear what they have to say, they will tend to withdraw from the conversation. That’s the beginning of disconnection.

Not listening – A more likely scenario is that we listen to what they have to say, but we don’t really hear. We don’t really want to gain understanding. Instead, we pretend to listen, but in truth, we are preparing our rebuttal in our minds the whole time our partner is speaking. Such tactics still result in disconnection, because your spouse will see that you have not understood or even given consideration to their point of view. It makes them feel devalued.

Berating or belittling – When we use shame or condemnation to hammer our point home, we destroy intimacy. Shame and Intimacy cannot coexist, because, by definition, intimacy happens when we are fully seen and yet completely loved as we are. Naked without shame. Shaming your spouse will inhibit them getting “naked” with their opinions in the future.

Ganging up – In some cases, we drag others who share our opinion into the conversation to prove that we are in the right. It doesn’t actually prove that you are right because resolving disagreements isn’t about taking a vote. It’s about getting on the same page, finding common ground and gaining understanding.

Not letting it go – Even if your partner comes around to your point of view, and the conflict is resolved to both of your satisfaction, you can cause damage later by repeatedly bringing up the fact that you were right and they were wrong. Not letting go of an argument after it has been peaceably resolved keeps the conflict alive and makes your spouse feel unsafe.

Making everything a big deal – Sometimes we make conflicts over issues that really don’t matter. For example, your spouse misremembers a detail of a story they are telling, or pronounces a word incorrectly or gets a date or time wrong. Sometimes, it just doesn’t matter. Let it go.

Speaking harshly – The tone and body language you use during conflict can often speak as loudly as the words you say. It’s easy to push your spouse away just by speaking harshly or giving a smirk or crossing your arms defiantly.

The Right Way to Be Right

So what if keeping your connection and maintaining intimacy was a greater goal than being right or proving your point? Such an outlook would more than likely result in disagreements that look like the following.

Showing honor – Maintaining an attitude of honor and respect is the best way to keep your connection during disagreements. That means valuing the other person and their perspective, even if you are convinced that you are right. Honor makes space for the other and their point of view, even if you hold a strongly opposing view. Honor dictates that we respond with respect rather than react with emotion.

Listening to gain understanding – listening to understand is a learned skill. It requires remaining focused on our partner and trying to discern their heart. It means not preparing your argument in your mind while the other person is speaking. It’s harder than it sounds. Repeating back what you think you heard is a very useful tactic.

Speaking with kindness – Keep a calm, non-defensive tone and demeanor. Even if you are convinced that you are right and your spouse is wrong, don’t accuse him or her or attribute motives to their opinions. Body language is also important. If you can actually touch while in a disagreement, that’s the best way to make a statement that you are on the same side.

Not sweating the small stuff – use discernment as to whether the argument is actually worth having. Will proving yourself right help your relationship or your spouse?

Agreeing to disagree – Not every argument will end in agreement. Be okay with respectfully holding different perspectives on an issue.

I encourage you to try this out.  The next time you and your spouse are having a disagreement about something, remember to shift your thinking from “winning” to “staying connected.”