Navigating your differences is often a matter of learning to value them instead of fighting them. 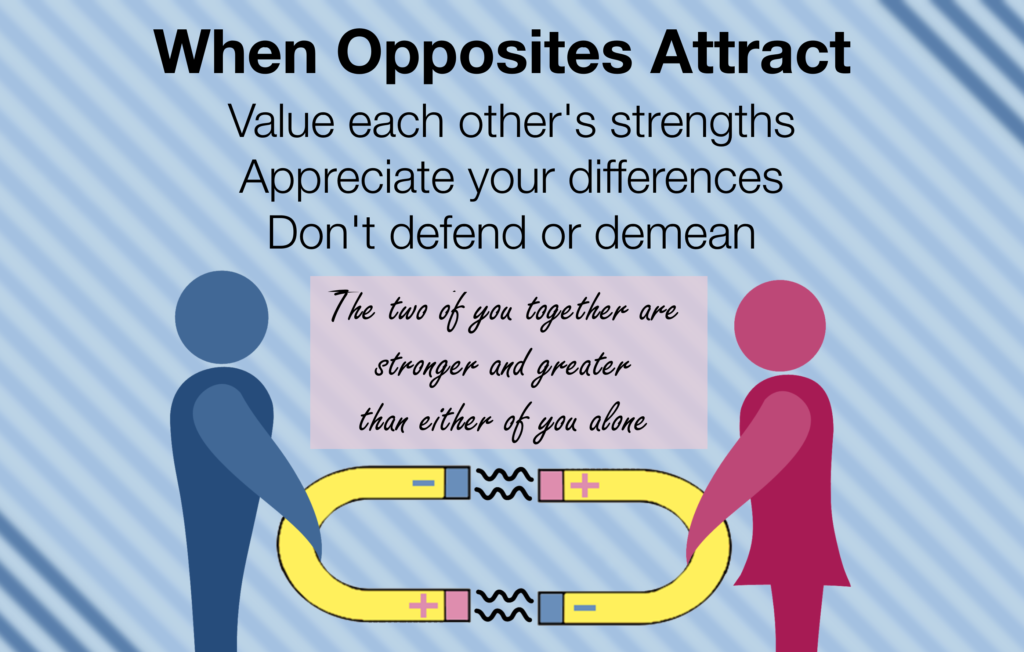 I’m convinced that opposites do indeed attract. After almost 35 years of marriage, my wife and I remain deeply in love, despite the fact that there are many ways in which we are as different as night and day. And I am actually quite thankful for that fact. Most of the time.

While there are many benefits and blessings from our differences, there are also challenges that come along for the ride. We have learned over time that navigating these differences successfully comes down to valuing and respecting them instead of fighting them.

Let’s look at a few common areas of difference.

Such differences in decision making style can cause conflicts. For example, when Jenni and I disagree on how to proceed with a decision my logical, fact-based opinions can be seen by her as not valuing her perspective, which tends to be based more on her feelings. It’s easy for both thinkers and feelers to feel misunderstood, devalued or even judged for their approach. But neither is right or wrong, just different.

According to one personality assessment site, feelers and thinkers should try to find value in each other’s decision-making styles. Thinkers, for example, can value the way a feeler is sensitive to the emotional needs of others and appreciate their ability to identify subjective dimensions of an issue. Feelers can appreciate a thinker’s fact-based, solution-oriented problem solving abilities in the midst of difficult or complex decisions.

Each brings a different perspective that together can improve the outcome.

Differences in sex drive often create significant stress on a couple’s sexual relationship. My own polls indicate that about 90% of couples have at least somewhat mismatched sex drives. The fortunate one-in-ten couples who have about equal drive levels report having the most sex and the highest overall sexual satisfaction. But what are we in the other 90% to do?

The first thing to remember is that sex drive levels are often largely dictated by hormones and other brain chemicals, which can be difficult to control or change. Whether your spouse is higher drive or lower drive, it is not their fault, and blaming them for it won’t help the situation. It will only make things worse.

While it is true that there are factors over which you have no control, there are also many other factors that influence a person’s interest in sex over which you do have control. Taking care of your overall health (sleep, diet, exercise), managing your stress level, working on the non-sexual intimacy in your relationship and being intentional about sexual thoughts and actions will all have a significant positive impact on your sex life.

Yes, mismatched sex drives is the norm, but there are many ways you can work collaboratively to ensure each other’s sexual satisfaction. The best attitude to take when dealing with your spouse’s difference in drive is to be an unselfish lover. Seek to work with and nurture your spouse’s sexual nature rather than fighting against it or demeaning them for it. We are instructed by Scripture (Col 7:3-4) to take responsibility for each other’s sexual satisfaction through mutual sexual surrender. The best way to do that is to take delight in delighting each other.

I love what Christian Psychologist and author Juli Slattery says in her post How Sexual Differences Can Strengthen Your Marriage. She says that every time you and your spouse disagree about something sexual, you are presented with a question, “What kind of lover will I be?” You get to choose either natural, selfish love or unconditional, unchanging love – the kind of love God gives us. This is what she calls servant love. Rather than asking, “What’s in it for me?” servant love asks, “How can I bless my spouse?”

I’m not sure why it is, but many married couples I know seem to consist of one introvert and one extrovert. That is certainly the case in my marriage (I’m the introvert).

Introversion and extroversion is another dimension measured by the Meyers-Briggs personality assessment. As traditionally defined, an introvert gains energy from alone time, whereas an extrovert gains energy from being with people. The opposite is also true – that introverts are drained by a high level of engagement with people, and too much alone time can drain an extrovert. Be aware that introversion/extroversion should not be confused with other personality traits such as being shy/outgoing, quiet/loud, or sensitive/insensitive.

Because they tend to help balance each other out, the pairing of introverts and extroverts seems to work well in most relationships, but it can also be a source of stress and disagreement that deserves some intentional and collaborative thought.

Working this out in my own marriage means my wife and I accept each other for the way we are wired and don’t try to change each other. But at the same time, we are also willing to step outside our normal comfort zones for each other. I’m open to willingly attend more social functions than I otherwise would and knowing that, she accepts that I’ll sometimes opt out. And she is open to leaving an event before she normally would when she senses that I’m nearing my people limit.

Each of these three differences can be difficult to navigate because they strike at the core of who we are. Rather than being accusitory or defensive, learn to value each other for the strengths each brings to the relationship. Learn to verbalize your own thoughts and needs in a respectful manner that doesn’t discount your spouse’s thoughts and needs.

Judging your partner because their natural responses and predispositions are different from your own will quickly lead to division and frustration. Accepting your spouse for the way God made him or her, putting your their needs above your own and proactively communicating about your differences will strengthen your marriage and allow you to avoid repeated battles.

Appreciate that your differences often mean that the two of you together are greater and stronger than either of you alone.

We’ll explore a few more differences next time in:  When Opposites Attract Part 2