Key lessons in effective communication during conflict learned from the recent US presidential election. 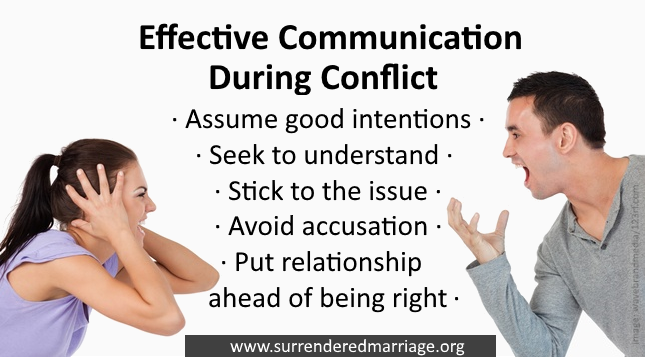 We are all reeling from the massive amount of yelling, accusation, fear-mongering, personal attacks and one-sided pontificating suffered during this election season, and we are all glad it’s over (well, mostly). Yet, I believe we can find valuable insights from it all for how to effectively communicate during disagreements in marriage.

Sadly, it seems our nation has completely lost the ability to have meaningful dialogue and respectful disagreement. People everywhere seem no longer able to listen, understand and thoughtfully respond. All too often I’ve seen this same kind of negative, destructive communication patterns used in marital conflicts. When this happens, dialogue ceases and the opportunity for understanding and growth disappears.

Here are my five lessons-learned regarding communication in conflict based on what I observed during the recent political season. By heeding these, you can maintain respect and honor in the midst of disagreement with your spouse (and anyone else for that matter).

What strikes me as the most toxic problem in the recent election is the way each side characterized the other side as having diabolical intentions and evil motives. I believe that the vast majority of people take their positions “for the greater good.” Each side believes that their solutions will result in a better America, yet neither side is willing to admit that we are all trying to build something better but just disagree on the methodology.

In marriage, assuming the best is also important. If you start with the belief that you both are good-hearted and a better, stronger marriage is your joint goal, it will go a long way toward allowing you to give each other the benefit of the doubt. Assuming good intentions allows grace to enter the conversation.

2. Seek first to understand, then to be understood.

It seems to me neither side of the political spectrum has had the least bit of interested in understanding the other side’s point of view. When we assassinate the character of others en mass we almost always automatically discount whatever they have to say.

Similarly, in marriage, when getting our point across and defending our turf becomes our highest (and sometimes only) priority, we spend more time building our case and gathering our defenses than trying to genuinely listen and understand. If we don’t tap into the “real story” underneath the disagreement by really listening to what each other is saying, we miss the chance for relationship growth. Remember, the goal is to understand as much as it is to be understood.

3. Stick to the Issue At Hand

A common tactic I observed this year was the frequent use of diversionary tactics. Rather than talking about issues and proposed solutions to our nation’s very real troubles, people would instead drag up unrelated “dirt” on the other candidate. Both sides frequently employed such smear tactics.

How often,  in the midst of conflict, do you drag up unrelated issues or past mistakes that have,  at least in theory,  been dealt with or that have nothing to do with the issue at hand? Don’t go there. Bringing in tangential issues only fuels your partner’s defensiveness and stops progress on finding common solutions.

It’s amazing to me that so many people spew accusations in an attempt to convince others to join their side. Since when does telling someone they are stupid, crooked or deplorable actually convince them of anything,  except of your disdain?

In marriage conflicts, it’s tempting to lash out with accusations against your partner, but it will not be at all useful in helping him or her understand your viewpoint. In fact it probably prevents or at least inhibits understanding. Accusation is a terrible change agent, so even if you feel hurt or angry, stop yourself from lashing out with personal attacks. If you have to remove yourself from the conversation until you can talk calmly, do so.

Many on either side of the political spectrum have failed miserably at valuing those on the other side. I honestly believe that God values people more than he values their political beliefs. He loves all people as individuals and longs to be in relationship with them. That’s the whole reason Jesus came – to make a way for relationship.

In marriage, we must put relationship first. We need to understand that protecting connection is more important than being right. It’s not that being right or wrong doesn’t matter, it just matters less than maintaining the relationship and sustaining and growing intimacy. It is better to be love than to be right.

What other lessons in communication have you derived from the recent political season? Share your observations in a comment.