Use these four little words to put you and your spouse on the same team. 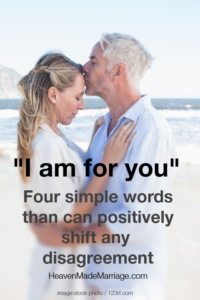 I posted last week about five ways to communicate effectively during marital conflicts. This week I’m offering you a simple strategy you can use to totally change the dynamic when you and your spouse are at odds with each other.

A couple from one of our marriage small groups offered their strategy when things get heated. One of them will stop and say:

Using these four simple words in the midst of a disagreement will remind your spouse that you are on the same team.  This little statement shifts the conversation in a way that invites collaborate on a solution.

When you work with each other rather than against each other it avoids accusation and makes it easier to maintain your connection.

In a similar way, you can convey the notion that “I am for you” when approaching a problem with your spouse simply by the way you describe the issue. Rather than taking a “me against you” posture, try taking an “us against the problem” stance.

For example, let’s say the issue is that your husband is constantly late for dinner. You could use terms that accuse him, such as, “You don’t seem to care that I work hard to prepare a nice meal for us after I put in a full day at work. You just show up whenever you want.” If repeated offenses cause you to be really angry, you might even just eat without him and leave him to fend for himself when he shows up.  A more helpful  stance would be say something like, “I know you work hard and I want to support you in your efforts to take care of our family. Since I know it’s often hard for you to know when you’ll be able to leave work, can we come up with some way that makes it easier for me to plan dinner  to line up with your schedule? It’s important to me that we find a solution that works for both of us.”

Let’s say your wife constantly makes social commitments for the two of you without consulting you or checking your schedule. You could angrily snap at her in an accusatory manner, “I’m tired of you signing me up for all these events that I don’t care about. It’s like my time counts for nothing to you.” You could also flatly refuse to go with her as a way of retribution. Alternatively, you could say something like, “I know it’s really important for you to get together with friends and family. You are super relational, and I know that people feed your soul. I want to support you in that, but is there a way we could make sure we align our schedules before making commitments? Maybe you could text or call me before saying yes? I’m open to other suggestions too.”

In both of these examples, statements of support and understanding (conveying that “I am for you”) precede the request to find a collaborative solution.

Who is the Real Enemy?

It’s hugely important to remember that your spouse is not the enemy in any conflict. Rather, think of the situation as one where you and your spouse are on the same team, facing whatever the issue might be.

When you can keep in mind that your spouse is not the enemy, it allows you to approach him or her in a collaborative manner. It also reduces the likelihood that accusation and defensiveness enter the conversation. Finally, it allows you to maintain your connection, even in the midst of conflict.

Think back to your latest disagreement with your spouse.  Would him or her saying “I am for you” have positively impacted the course of the conversation?